Use case spotlight: Streetcred- connecting DIDs across industries and applications

The Sovrin Foundation is proud to be an open source project and is lucky enough to have a front row seat witnessing the growth of this thriving community. As a member of Hyperledger and a lead contributor for Hyperledger Indy (a newly Active project!), it is exciting to witness developers pick up the tools and educational resources offered up into the Indy code repository and build some really cool things.

Streetcred is one such cool project. After discovering Indy and experiencing problems managing his own identity, Founder Tomislav Markovski was inspired to create a way for decentralized identifiers (DIDs) to work interoperably across networks or apps. The Sovrin team has seen his remarkable work in action as he codes and builds advanced identity tools, seemingly overnight. His reputation as a “beast” in the Indy developer community precedes him.

We caught up with Tomislav after seeing his successful demo of his new identity app, Streetcred, at the 28th meeting of Internet Identity Workshop in Mountainview, California. We asked him a few questions about Streetcred and how his work is helping move the needle towards self sovereign identity.

Sovrin: Tell us about yourself and your background. What motivated you to pursue work in decentralized identity?

Tomislav Markovski: Originally from Macedonia, I moved to the US seven years ago. I’ve been doing programming since 5th grade. My background is in mobile and cloud development with a focus on emerging technologies. I am a firm believer in functional programming and decentralized technologies.

Deciding to get involved with identity is an interesting story. While I have always been interested in working with identity solutions, something happened a couple of years ago that made me pursue it more seriously.

I was moving between apartments in New York City and the market in NYC can be very competitive. My real estate agent asked me to submit all kinds of proofs for income and securities, in addition to doing background checks. Shortly after, my identity was stolen and the bank called me to notify about a large suspicious transaction from my account. We prevented the attempt, but the person responsible got away.

That was the moment I realized how innocently we share our private information with unreliable services without thinking about the consequences or if our information is managed securely. Indy and Sovrin Network seemed like the perfect solution for this.

S: What is Streetcred? Where did it come from?

Our goal is to allow users better control over their personal identity information and allow reliable communication with other participants in the ecosystem.

I began work on it last year while working on another project in Hyperledger and discovered Hyperledger Indy. After attending the agent community calls, the idea of creating a unified platform for DID communication came to mind. I wanted to create a single framework that will be able to be used in any application: backend services, mobile apps, web apps, IoT, games.

The first efforts of this eventually grew to be the Indy Agent Framework for .NET – an open source library for building Hyperledger Indy agent services. I built the Streetcred platform on top of this framework.

Our first and most complete product is the Streetcred Mobile Identity Agent. This app is a free digital identity wallet allowing users to interact with services compliant with DID Communication protocols. IIW attendees this year were the first to try out this app which worked with the services demoed by BC Gov.

Next is the Streetcred Agency Hub. This is a cloud-based service offering institutions an easy way to work with digital identity. We offer several tiers of integration: web portal, cloud API, dedicated hosting tenant, as well as consulting services for organizations who would like to develop their own agents.

S: Describe some of the services Streetcred offers. What kinds of organizations or companies will benefit from Streetcred?

TM: Any company or individual can benefit from Streetcred, whether the use case is credential exchange, secure communication or authentication.

Companies who would like to quickly try out digital identities without investing a lot of resources in training and development will benefit the most.

Our platform offers end-to-end solution simply by signing up for a hosted tenant.

S: Please describe your demo at IIW 28 that took place on Wednesday May 1. What was the most exciting part of the demo? 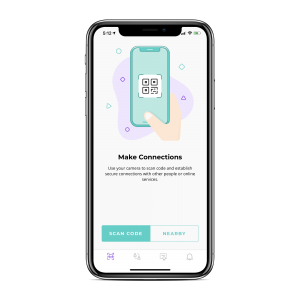 TM: After connecting at the Sovrin Agent Connect-a-Thon in February, I was excited when our friends at BCGov decided to use our mobile agent to showcase credential issuance for their email verification and IIW attendance agent services.

John Jordan and Stephen Curran from the Government of British Columbia are well-known within the open source community to be doing some advanced work with their own project within the BCRegistry called the OrgBook, and uses the Verifiable Organizations Network (VON)  for issuing and exchanging verifiable credentials. With this combination, anyone can search for and find registration information for over half-a-million legal entities operating in the Province of British Columbia. These are the numerous government services who issue specific credentials to organizations. Permits to take water, liquor licences, business licences, building permits are among the many, many examples.

Their demo session at IIW was held twice during the conference and the feedback for Streetcred and the credentials repository was very positive. We had about 30 people at the same time trying to connect to each other and exchange credential proofs – it was amazing watching this happen!

Another exciting moment was when people got to use their credentials to participate in another demo by another developer in the Sovrin Network called Mattr. They used Streetcred to showcase a proof based authentication.

Being able to communicate with all these different agent services and codebases is the most important aspect of SSI and I believe we succeeded at that.

S: What role did Hyperledger Indy and the open source community play in the development of Streetcred?

TM: Hyperledger Indy was the concept originator for our platform. The work of the community on the DID Communications protocols and standards shaped the technical direction of our products.

We have been actively contributing back to the Indy project and the community and we maintain a number of open source tools and projects related to Indy.

S: What do you think the next 5 years looks like for digital identity?

TM: Considering the growing amount of personal information that is currently stored in unsecured systems, and the surge in traffic and theft of this information, I think there will be a steady evolution of digital identity solutions based on decentralized systems.

These solutions will find market entry as valuable applications, like Streetcred, emerge. As these applications gain public exposure, I think we will see a shift in how people think about their identity information and its value.

S: How will technologies like the Sovrin Network help create a future of self-sovereign digital identity?

TM: Sovrin Network is essential in providing a platform for digital identity development. Fostering of a community and developer network allows for creation of standards between different development efforts, resulting in interoperability of multiple solutions.

The work we did at Sovrin’s February Connect-a-thon was instrumental in aligning efforts between various identity implementations. Sovrin Network allows a trust ecosystem to be formed and grow naturally, providing just the right amount of framework for anchoring trusted information through the distributed ledger. Sovrin acts much like the culture in a laboratory petri dish, providing for the development of evolving biological growth.

The Sovrin Network enables the exchange of create self-sovereign, verifiable digital identities, a need that is critical for the security and privacy of personal information across multiple industries and scenarios. Hyperledger Indy is an open source blockchain project purpose built for identity applications that developers could build on Sovrin. To learn more about Streetcred, visit https://streetcred.id or follow them on Twitter @streetcred_id. Developers can check out the open source contributions at https://github.com/streetcred-id/

Photo by Kevin Rajaram on Unsplash