An introduction to SSI and where it came from.
2020 as a growth catalyst and where SSI is going.
A Sovrin Foundation perspective.

It goes without saying that last year was transformational for the world. Along with pains felt by many, the challenges of 2020 were also a catalyst for positive growth. The global SSI community, dedicated to privacy-respecting digital identity, has risen to these challenges. Digital identity solutions have been called into action by governments and companies large and small to help mitigate pandemic-related public health challenges. This call to action has accelerated adoption of SSI across many use cases where it brings new standards of truly privacy-respecting digital identity control to all peoples of the world.

But first, what is SSI?

SSI is an acronym for self-sovereign identity, representing the secure, privacy-respecting digital identity model developed around blockchain technology starting in 2016. During the last five years acceptance of this model has grown rapidly. SSI utilizes best practices in open-source cryptography and decentralized computing in tandem with humanistic governance. It also helped drive development of new technology open standards such as W3C  Verifiable Credentials and Decentralized Identifiers. While SSI incorporates a wide range of complex technology and detailed governance, its essence is captured in the opening chapter of a book that will be published during 2021:

“The best overall analogy for the decentralized identity model (SSI) is in fact exactly the way we prove our identity to each other every day: by getting out our wallet and showing the credentials we have obtained from other trusted parties. . .. With decentralized digital identity, we just do this with digital wallets, digital credentials, and digital connections.” ¹

SSI has emerged as a, “simple, neutral, memorable name for this new model for digital identity.” ²

SSI is rooted in core principles of privacy-respecting Internet-scale identity architecture first laid out by individuals like Kim Cameron with his Laws of Identity, which were published in 2006. Such governance principles, combined with open-source technology advances in blockchain, cryptography, supporting software and standards, ultimately gave rise to reliable SSI infrastructure starting in 2017. Open-source development of digital identity technology, standards and principles is truly the engine of SSI growth.

The Sovrin Foundation, a not-for-profit corporation, was established in 2016 to promote global adoption of SSI as an open standard for digital identity. Over the past five years the Foundation has operated the Sovrin Ledger as the best-known SSI identity network, helped advanced the most widely used SSI open-source software (Hyperledger Indy, Ursa, and Aries), published the most widely used SSI governance framework, and drives SSI thought leadership in areas including data protection, financial inclusion, IoT, and government-issued ID. In its role as an originator and disseminator of open-source SSI concepts and code, the Sovrin Foundation is dedicated to supporting SSI development in cooperation with companies, organizations and governments around the world.

One of the most important products of this work is the “Sovrin Stack,” shown in Figure 1. 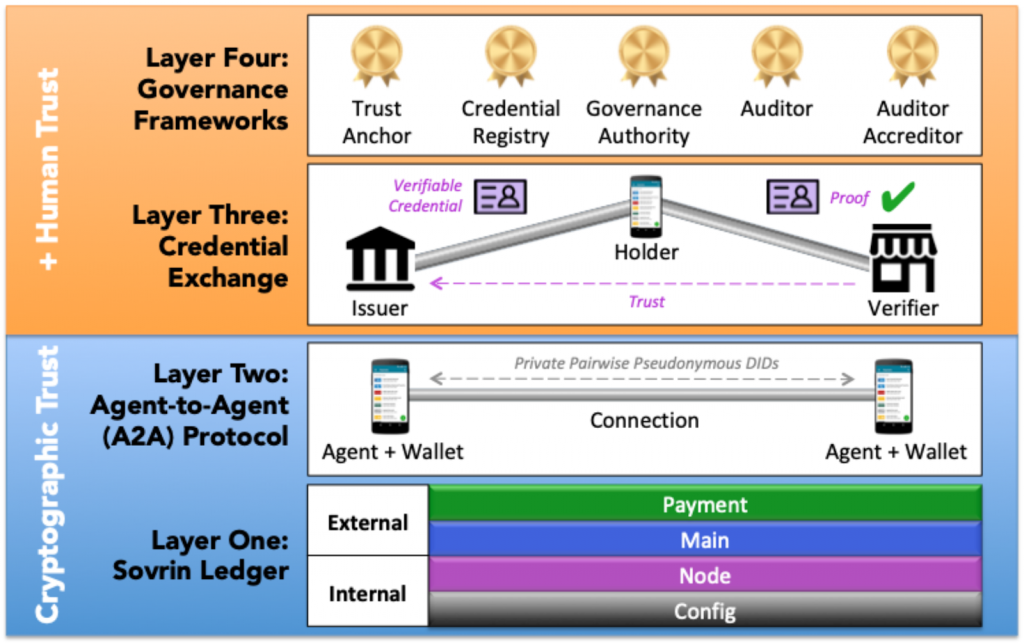 Figure 1: The Sovrin Stack, developed by the Sovrin Foundation and the global SSI community, was created in early 2019 and is curated as part of the open-source Sovrin Governance Framework.

The Sovrin Stack also represents the first recognition of the critical role governance frameworks play in bridging the technological innovations of SSI with real-world policy requirements of governments, industries, businesses and individuals. In fact, as the importance of governance frameworks became more widely acknowledged, the SSI community recognized that specialized governance was needed at all four layers of the stack. During early 2020 the Sovrin Stack evolved into the Trust over IP (ToIP) stack, shown in Figure 2. 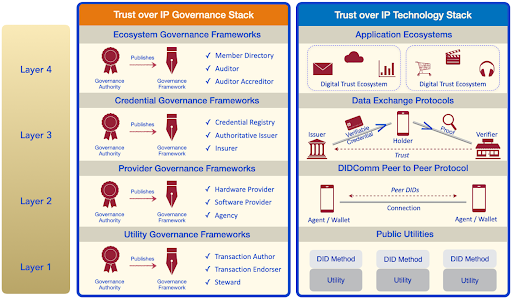 Figure 2: The ToIP stack, showing how governance frameworks apply to all four layers of the stack, and also how Layer 4 can support entire digital trust ecosystems.

As a model for decentralized digital trust infrastructure at Internet-scale, the ToIP stack was compelling enough that in May 2020 it became the cornerstone of a new Linux Foundation project called the ToIP Foundation. Rapid growth of ToIP Foundation membership is a testament to how core concepts of SSI architecture are strongly supported by respected governments and companies.

Emergence of entirely new organizations promoting SSI adoption is evidence of the effectiveness of the Sovrin Foundation’s open-source approach to advancing technology and thought leadership. The Foundation’s success is measured not only in by results it delivers, but in the progress of derivative and novel SSI products and services created by organizations which build on contributions of Sovrin and the global SSI community.

2019: Early success ahead of unexpected crisis

Prior to the global public health crisis of 2020, SSI was progressing along a steadily increasing adoption curve. Start-up companies, global corporations, digital identity privacy organizations and a variety of national and regional governments (Canada, UK, US, Germany, British Columbia, Ontario, etc.) were all expanding SSI infrastructure and launching initial use cases. This advancement was based on vigorous technology development (open-source software architecture, code and standards), a robust global public identity utility (the Sovrin Ledger), the first comprehensive decentralized digital identity governance framework (the Sovrin Governance Framework), and proof of concept use cases produced by a variety of governments and companies.

Woven throughout this activity, the Sovrin Foundation acted as a convener, facilitator and beacon for the global SSI community. The Foundation’s commitment to the Principles of SSI, open-source technology and identity ecosystem governance, combined with efforts to sow the ethos of SSI across a spectrum of use-cases, helped to create fertile ground for emergent applications. During this course of activities Sovrin and the SSI community unknowingly primed the world for tremendous acceleration of SSI adoption during a most unexpected year.

As the world embarked on a new decade at the start of 2020, almost no one could have guessed what their lives and societies would look like 365 days later. Public health challenges of 2020 brought tremendous stress and grief to most corners of the world. Yet, the situation also created opportunity for unprecedented growth of technologies that could address urgent social needs. For SSI, this meant compressing what could have been a five-to-ten-year adoption process for sensitive use-cases into a period of 12 months.

During normal times, new technology standards for critical services such as medical information credentials, travel credentials and critical worker credentials often face regulatory review and approval marathons spanning years or even decades. Fortunately, prior to 2020, the core components of SSI had already been assessed and accepted by respected companies and governments. These organizations understood that trusted digital identity must be privacy-respecting, which is a central requirement for SSI technology and governance. With solutions needed immediately for verifiable proof of medical test results, vaccination status, etc., the standards and technology developed with the support of the Sovrin Foundation and the global SSI community have been fast-tracked into service.

Just a few of the SSI implementations that were launched in 2020 or are pending launch in early 2021 include:

While scientists and professionals in the fields of biology, genetics, immunology, medicine and public health are the superstars of 2020, SSI is also in a position to make a major contribution. Reliable digital credentials for medical test results and vaccination status, in the form of W3C Verifiable Credentials backed by privacy-respecting governance, can help societies more safely return to normal levels of social interaction and restart economies. At the same time, the SSI model will be establishing new standards and expectations for person identity data management and control by individuals.

Unexpected urgencies that accelerated broad acceptance of the SSI digital identity model during 2020 will continue into 2021. Ongoing challenges of the global pandemic can be mitigated by expanded use cases and public acceptance of trusted digital identity. In the most forward-thinking and dynamic jurisdictions, SSI progress is anticipated in the following areas:

While the wellbeing of individuals and societies during this historic time rests largely on the clear thinking and actions of responsible scientists, business leaders and government leaders, SSI is also playing a significant role. The Sovrin Foundation is dedicated to supporting global adoption of SSI to help mitigate challenges of this pandemic, while advancing its mission of Identity for All.